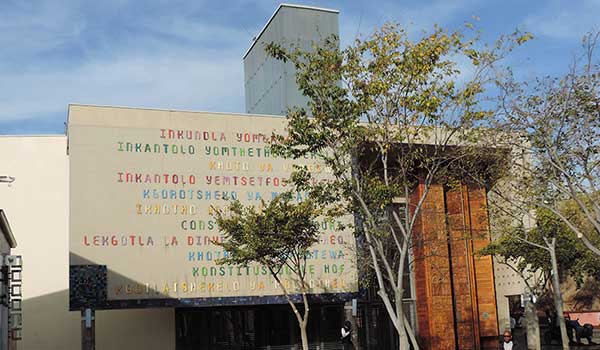 A Taste of the History of South Africa (B)

We provide a political synopsis of events leading up to Apartheid in 1948. Then onto Liliesleaf Farm, the scene of the Rivonia Raid in 1963.
This site represents a turning point in South African History
This is a recently opened Museum and the main house and surrounding buildings have been restored to exactly how they were in 1963.
The background to the formation of the armed wing of the ANC and the Communist Party is provided, the events from 1902 which led to the decision to go the route of the armed struggle in 1961, explained.
The story in detail of the Rivonia Raid which took place on July 11th, 1963 when the leadership of the ANC and Communist Party were caught plotting the military overthrow of the South African Government, is told in detail. The Museum visited, the story of the arrest of Nelson Mandela and the story of the Rivonia Trial told in vivid detail.
Both the House and room where they were arrested are visited and the exhibits explained.

The Constitution Court and the Fort

Constitution Court and the Fort are then visited. Built by Paul Kruger as a prison in 1893, later converted to a Fort after the abortive Jameson Raid” and then finally serving as a prison right up until 1983, the visit includes the old Fort. This is where Nelson Mandela was imprisoned on two occasions, as well as other leading South African struggle heroes. The Fort, initially built by Kruger to imprison the “Uitlanders”(foreigners) who worked on the gold mines, is located next to the new Constitution Court.
Before going into the Court we visit “Number 4” prison- This was where thousands of black prisoners were imprisoned for offences ranging from “pass offences” to political activists. The exhibits paint a chilling picture of how South Africa treated its criminals.
In contrast to Number 4 we then visit one of the most sophisticated courtrooms in the world- South Africa’s Constitution Court. The Court, its design, emblems, symbols and logos are explained and visitors are taken into the courtroom. Depending upon the day and whether or not the court is in session, it is possible to sit and listen to the proceedings of the highest court in the land.
In addition visitors view the excellent display of South African art on exhibit next to the Great African Steps as well as the shutters and other artistic finishes to the Court.
The court is situated next to the old Fort as well as next to Hillbrow- the first “Grey area” of Johannesburg signaling the breakdown of apartheid.
Throughout the tour stories and anecdotes are told to make the tour interesting , moving and memorable. The workings of the Court are explained and the visit is likely to rate as a “Must” for all visitors to South Africa.

Then we drive to Pretoria and visit the Voortrekker Monument.
As an introduction we explain the background to “Die Broederbond” the rise of Afrikaner Nationalism and the recreation of the Great Trek in 1938 to coincide with the unveiling of the corner stone of the monument. The symbolism of the various aspects of the Monument are explained. In detail
Inside the Monument the story of the Great Trek is told as is the killing of Retief and the Battle of Blood River as well as all 27 friezes described.
The significance of December 16th and the Vow are told in detail.
The History is told from a traditional ‘white” perspective as well as from a Zulu perspective.

We visit the farm where the Death Squads operated. Special permission to do this is obtained from the Government. It is believed that more tan 1000 people were killed at or from Vlakplaas, Stories of the atrocities are told and sites visited on the farm where torture and killings took place.

NB. This part of the tour is NOT considered suitable for children, under the age of 12. SPECIAL PERMISSION TO VISIT THE FARM HAS TO BE OBTAINED FROM GOVERNMENT SO A MINIMUM OF WEEKS IS REQUIRED TO DO SO.