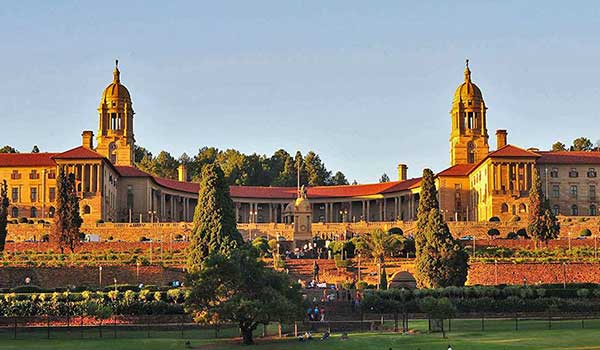 We start the day with an overview of the country, the different population groups, some of the demographics as well as describing some of the terms used to describe the people of this country. We detail the 11 “Official Languages” as well as the other 4!
Depending upon the interest levels of the group we give a talk titled “20000 Years in 60 Minutes!”

Described as the “Bastion of Afrikanerdom” the reasons behind the building of the Monument are outlined. The events leading up to the unveiling of the cornerstone in 1938 and the impact of its opening on South Africa including the re-creation of the Great Trek. The role of “Siener Van Rensberg and his prophesy of revolution, as well as the actual unveiling of the corner stone are outlined.
The symbolism of all aspects of the Monument and its position in Boer History are described in detail. The 64 wagons, the statue by Anton Von Wough, the Boers guarding the Monument and all architectural features are discussed.
The Monument is then entered.
This is one of the most striking Monuments of its kind in the world.
The Hall of Heroes is described and the Italian Marble frieze featuring 27 stories described. The Artists and there work is discussed as well as the symbolism of December 16th and the reasons for its importance highlighted.

Then we stop at each of the Marble Friezes, selecting the most important of these and telling the story related to that frieze.
The History is related from a traditional Boer perspective with the more modern Zulu interpretation of events presented to ensure a balanced interpretation of the Great Trek, the killing of Retief (Murder or execution?) and the Battle of Blood River.
After telling the stories of the friezes we visit the Museum downstairs where the “Flame of Civilization” burns today as well as view the magnificent tapestry depicting the Great Trek made by Afrikaner women in Pretoria.
Finally we take a lift to the top of the Monument for the view over Pretoria and the country. Features are pointed out to guests.
Depending upon the interest of guests we include a visit to the Museum at fort Schanskop.

Church Square is then visited. Guests are encouraged to walk in the Square and visit the statue of Kruger and examine the buildings of the old “Raadsaal”, The Palace of Justice, and some of the turn of the century buildings in the Square (the original market place) 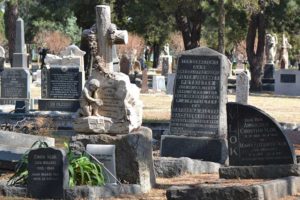 Then we visit Church Street Cemetery.
This is the cemetery where “Heroes acre” is located and the graves of prominent Politicians, Afrikaner Poets and Personalities and Presidents are located.
We tell the stories of the South African War and see the British war graves as well as the graves of Afrikaner heroes such as Joepie Fourie.
The grave of Breaker Morant is visited and his story told as well as Queen Victorias Grandson.
Throughout the visit stories are told of the people who’s graves we visit.

Paul Kruger’s home in Church street. This little Museum in Krugers Home shows how the President of the first Boer republic lived. In addition there are many artifacts and memories of the period of the Boer War. The train carriages where Kruger governed the Republic from are visited as well as the Museum with the items contributed by countries around the world expressing their sympathies at the time of the South African War.

The building where Winston Churchill was imprisoned in November 1899 and the site of his escape from captivity are driven past and a brief outline of his role in South Africa given.

Built by Sir Herbert Baker are visited. The beautiful view over Pretoria enjoyed and aspects of the Union Buildings and their role in present South Africa are discussed

This 52 Hectare site described by President Mbeki as ..”an island of peace that invites us to reflect and contemplate…..”
It is still undergoing construction and is a key Presedential Legacy project. The freedom Park was launched in 2000 and serves as a response to to the need identified by the Truth and Reconciliation Commission for symbolic reparation of past conflicts in South Africa.
The visit includes the Wall of Names, the Sikhumbuto; The Isivivane (the symbolic resting place of the spirits) and the beautiful gardens and buildings.